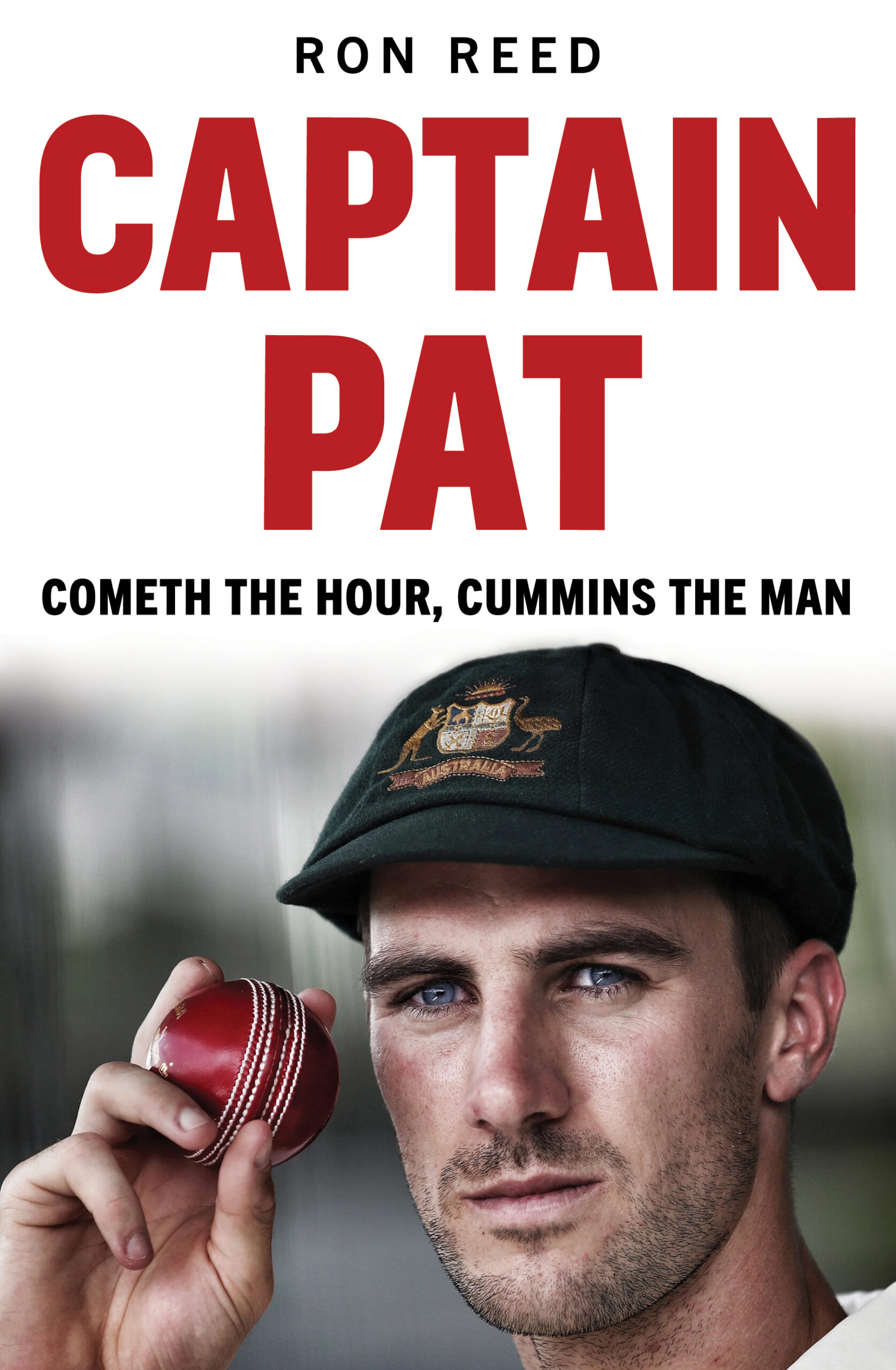 NEW KING ASCENDS TO THE THRONE

Life has a habit sometimes of putting the foot down on the accelerator just when you’re not really expecting it—and leaving it there, while you cling to the wheel and see where and how far the wild ride is going to take you. That’s been the case for Patrick James Cummins for most of his relatively young life, most notably from the day—November 17, 2011—when in South Africa he achieved the dream of countless thousands of young Australian men (and, these days, a lot of women as well) and became a Test cricketer, the 423rd man to wear the baggy green cap that distinguishes this proud and privileged cohort from every other exponent of the nation’s most popular and important international sport. And he was just a boy of 18 years and 193 days, the second youngest ever to wear the iconic headwear behind Ian Craig, the precocious Sydney batsman who debuted, also against South Africa, in Melbourne in 1953, aged 17 and 239 days.

Ten years later, almost to the very day, November 26, 2021, now 28, Cummins was appointed Australia’s 47th Test captain, another huge achievement that neither he nor anybody else associated with the noble old game was expecting to happen, not at that particular juncture anyway. In the not-too-distant future, perhaps—but not yet.

And most certainly not in the dramatic circumstances that brought it about.

A week earlier his predecessor Tim Paine had resigned in tears—in disgrace, in the eyes of many—when it was revealed that he had been guilty of sending lewd text messages, including what is colloquially known as a “dick pic”, to a female workmate three years earlier.

This ticking timebomb exploded more or less on the eve of what is always the most important fixture on the cricket calendar, an Ashes series against England. For all concerned, the timing couldn’t have been worse—with the possible exception of the English team who were already in the country, preparing, and who would hardly be dismayed at their opposition suddenly being confronted with a massive and embarrassing internal distraction inside and outside the dressing room.

But it is an ill wind that blows nobody any good and Cummins was the most obvious beneficiary.

He wasn’t necessarily the only one. Australian cricket—indeed, the game at large—was being confronted by issues of image and culture in various ways and Cummins’ arrival in a position of such power and influence on and off the field of play had a lot going for it.

True, he had next to no experience in such a hot seat but that was balanced by enormous respect, from the Cricket Australia administration to his teammates and, crucially, the sporting public.

It is hard to think of any Australian captain who has come to the post with so much goodwill.

Long before this life-changing development, he had become— to employ a cliché that does not sit comfortably with his own self- estimation—the Golden Boy of the Australian game.

There were multiple reasons for that.

Not only was he a brilliant player in all three forms of the game— officially recognised as the world’s best fast bowler for the past two years—but he was also highly intelligent, and, not to be underestimated, blessed with the good looks of a film star. Tall, dark and handsome seems an understatement.

As a package, it was beyond pleasing—impossible to dislike, in fact. He had never been involved in any lurid behaviour or trouble- making, unless you wanted to count that he was a member of the team that was responsible for the ball-tampering scandal that brought the Australian team to its knees in South Africa in 2018 and saw then captain Steve Smith, senior batsman David Warner and rookie Cameron Bancroft stripped of leadership roles and suspended for long periods.

There was never any suggestion that Cummins, or the other fast bowlers, Mitchell Starc and Josh Hazlewood, were involved in illegally sandpapering the ball—cheating, in other words. If it ever emerges that they were—and a lot of people are waiting with great interest if not trepidation on the book that Warner, the accused mastermind, is expected to write as soon as he retires—that will be something that has to be dealt with then.

Unless and until that happens, Cummins’ charisma, charm and common-sense will be assets almost as important as his bowling, batting and fielding skills.

In the way that he meets the eye he has often been compared— certainly, by me—with Keith Miller, the legendary all-rounder who was such a powerful force in the post-war years, especially when Don Bradman led the 1948 Invincibles throughout a long tour of England without losing a match, a feat never repeated.

Miller was a great bowler but Cummins already had him covered, with 164 wickets at 21.59 in the 34 Tests he had played before his promotion, compared to Miller’s 170 at 22.97 from 21 more games. Cummins was about to sail straight past him with another 21 in the upcoming battle. But Miller averaged 36.97 with the bat, more than double Cummings’ 16.46.

Miller, also a League footballer good enough to play for Victoria and a fighter pilot during the war, and also the perfect physical specimen that made him irresistible to women everywhere, even Royalty in the case of Princess Margaret, was an incorrigible playboy with little regard for authority. Even his own leadership at state level was never embraced all that seriously, all of which almost certainly explains why he was never entrusted with the Test captaincy.

Much the same can be said about another great playboy champion with charisma and talent to burn—and a lot more ambition than Miller—in the late, great Shane Warne, who was overlooked in favour of the much more uncontroversial Steve Waugh when Mark Taylor passed the baton in 1999.

The champion leg-spinner—the best Australian cricketer of his time—had his ample share of flaws and foibles, but when he died suddenly of a heart attack at just 52, a few weeks after the Ashes, they had been well and truly submerged by reflections on how good he had been for the game in every respect.

Would he have been a good captain? Almost certainly. In the outpouring of grief after his death, many of his fans suggested the administration might have missed a trick by overlooking him, even if they did have their very valid reasons.

But that is unfair to Waugh, who brought no baggage to the table and did the job superbly for a long period of Australian Test domination. Personality has always been regarded as a crucial component whenever the Cricket Australia directors have to decide on a new figurehead, every bit as important as playing ability.

That’s because they jealously protect the long-held public assertion that there is no more prestigious post in all of Australian sport, and very few in any area of public life.

There has always been a sort of urban myth that it ranks only a single rung behind the Prime Ministership, which may or may not have been true in days gone by. Bradman, for instance, was more revered than any politician—but the comparison is probably more romantic than rational these days.

Nonetheless, when the day arrived to assess Cummins’ suitability for the role, this concept mattered enormously.

The previous two captains, Smith and Paine, had both departed in tears, having been seen to have feet of clay in very different ways.

Paine’s painful exit was beyond ironic, given that he was hurriedly appointed mid-match when Smith’s tenure ended so traumatically.

The veteran wicketkeeper was designated as a safe pair of hands in every respect as the powers that be set out to try to restore badly shattered public confidence and respect, a process that saw several senior administrators, the incumbent coach and the team’s operational manager also depart one after the other.

Responsibility for the rehab was accepted by Paine and the new coach Justin Langer, along with white-ball captain Aaron Finch, while Smith and Warner paid their penance in exile, pledging to return better men for the experience.

Although results on the scoreboard were mixed, the repair job was seen to have been largely successful, with Paine widely praised for his calm demeanour and emphasis on integrity, pride and respect for the game’s image and traditions.

But for most of that time, he—and an increasing number of other people, not all of them in official positions—were aware that it could all blow up in his face, which it inevitably did. And in a few other faces, as well.

So where to next? And how? There could be no wriggle room for getting the next move wrong. And it was far from a straightforward decision.

There were only two logical candidates, Cummins and Smith—and there were authentic issues with both, although one much less so than the other.

Cummins was vice-captain and therefore the front-runner, but his only experience was a handful of games in charge of the New South Wales limited overs team a few months earlier, an assignment given to him for this very contingency—that he might need the experience at the highest level in due course.

He didn’t lead under-age teams as most obviously gifted juniors do because he was such a prodigy that he would always be the youngest player in the team.

And of course, he was a specialist fast bowler, and no one of that ilk had ever been entrusted with the Test captaincy, with the exception of Ray Lindwall who stepped in for one match in India in 1956 as a temporary replacement for the injured Ian Johnson.

Yes, there are obviously reasons why on-field decision-making is more easily handled by batsmen who do not have the added mental strain of bowling themselves, but it has nevertheless always seemed to be an anachronism—not to mention an insult to some very good people who have specialised in that demanding skill for long periods.

It hasn’t stopped players from other countries, such as Pakistan’s Imran Khan and Wasim Akram, England’s Bob Willis, India’s Kapil Dev, West Indies’ Courtney Walsh and South Africa’s Shaun Pollock, among others, making a reasonably successful fist of it.

Besides, the captaincy extends well beyond the boundary rope and the designated hours of play. The job requires skills in man management, diplomacy, media interaction and public relations— “smarts” of all sorts.

There is no good reason to believe that fast bowlers should be any less capable of this than the blokes who bat—Cummins certainly no exception.

But that was never going to sit well with large sections of the public, many of whom continued to believe that he should not even be welcome back in the team as a player, and certainly never as the captain.

It would have been a potentially explosive decision to put him back in charge.

Still, that didn’t mean Cummins was a walk-up start. Normally, any new captain is recommended by the selectors, and then approved—or not, in Warne’s case—by the CA board of directors.

But this time they went the extra mile, requiring two of the selectors—the chairman George Bailey and the recent appointment Tony Dodemaide, but not the third one, coach Justin Langer—to join the interim chairman Richard Freudenstein, the chief executive Nick Hockley and board member Mel Jones on a panel to interview both men.